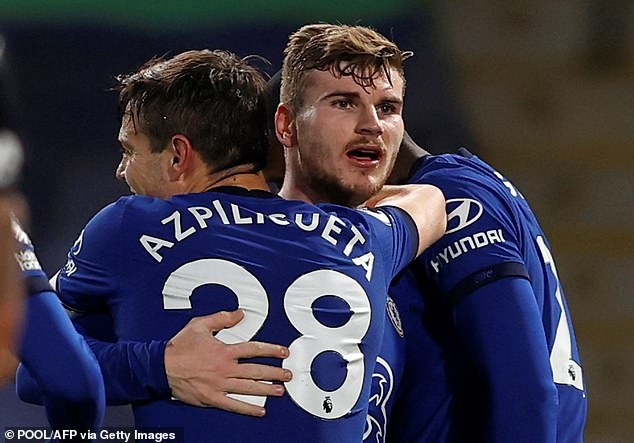 Timo Werner has revealed his relief after he finally put an end to his 15 Premier League game goal drought after his striker helped Chelsea overcome Newcastle at Stamford Bridge on Monday.
Werner's first league strike since November 7 meant the German went without a goal for exactly 1,000 minutes, which saw him heavily criticised for his role in the team – especially when the Blues parted with £53million to bring him in last summer.
Thomas Tuchel had insisted only a goal could restore Werner's shattered confidence and it appears that his strike against the Magpies has done just that, after he revealed that he was 'happy' to end his voodoo in front of goal.
Werner told Sky Sports after the 2-0 victory: 'I think as a striker, you always want to score.
'The last month I was not happy about not scoring, but it's a team sport and when we win, everything is good. When I help my team with assists, winning penalties and now with scoring, I'm happy.
'For a striker, it's much worse when you don't come into the situation and you don't have chances. I had a lot of chances and I missed them. Today, my team brought me a lot of situations where I could score and that's the important thing for me.'
In what would've been a cruel twist of fate, Werner almost saw his goal chalked off after the ball went agonisingly close to brushing Olivier Giroud's arm before falling to the striker's feet at the back post.
However, after VAR allowed the goal to stand, Werner reveals he saw the funny side of it.
The German added: 'Yes, I said to the bench, it would be (typical) if it was handball and the goal didn't count, it would be right to the story but at the end, I'm happy.'
The win at Stamford Bridge now sees Chelsea jump to fourth and push defending champions Liverpool down to sixth, with Werner hailing the team's spirit.
'It's really important. I think it's important for us to reach the Champions League at the end,' continued Werner.
'At the start of the season, everybody said we are favourites of the title, but in the last two months, it's shown that we are not. We have a lot of work to do that we close the gap to (Manchester) City and other clubs.
'The football we have played, the games we are winning are not so easy games so it shows that we can and make a development like we have in the last few weeks. We can reach the top four but also look towards next year and more.'
While Werner has received plenty of criticism for his unwanted goal drought, Jamie Carragher believes the former Leipzig hitman has still made a big impact on the team since arriving in last summer's transfer window.
Carragher pointed out how much work Werner does for the team and believes the forward will now push on while continuing to be Chelsea's 'main threat' in front of goal.
'The big story here is Timo Werner,' Carragher told Sky Sports after the game. 'He basically gets free on the back post and he gets on the back of Jamal Lewis. So many goals we see strikers at the back post.
'The interesting thing is, because he's played well tonight, we're talking about him and he's done an interview as man of the match, we can't dress that up about him having a great season. We were expecting a little bit more.
'But I actually think he's been a little bit unfortunate. He has hit the woodwork five times – as many as any player in the league this season, and he's actually won four penalties for Chelsea. So he's been involved in more goals for Chelsea.
'So when you look at the numbers, how long he's gone without scoring, he has actually had an impact this season. He's probably been a bit unfortunate with the woodwork but he's getting penalties for the team. He has still been the main threat this season, but he has been brought into score goals and he will have to improve that.'
News