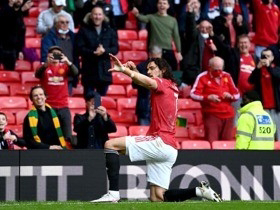 The big news in Manchester this summer was undoutbedly the return of Cristiano Ronaldo to the city. At one point tipped to join Manchester City, a 24 hour frenzy saw him instead added to the ranks of Manchester United once more, 13 years on from his departure from the Theatre of Dreams.

The Portuguese marksman has hit the ground running too, netting twice against Newcastle and then once in a dramatic 2-1 victory over West Ham. He also netted against Young Boys in the Champions League, but was unable to prevent the Red Devils falling to a 2-1 defeat to their Swiss opponents.

A player who spent last season going quietly under the radar for Manchester United, however, was Edinson Cavani. Brought in on a free transfer, the Uruguayan striker netted 10 goals in 26 Premier League appearances, helping his side finish second in the table come May.

Having been blighted by injury so far this season, Ole Gunnar Solskjaer revealed that the 34-year-old striker was finally back among the first team, and available for selection against Aston Villa, saying:

“Edinson has joined in training fully after that game [on Wednesday] and he’s held his hand up and is ready.

“Last season as well, he didn’t have a pre-season when he came here. He’s so professional and meticulous and, of course, we’re glad to now have him back training with us and in the squad.”

When asked on the prospect of seeing Cavani link up with Ronaldo, Solskjaer appeared to suggest that a change of system may see him deploy two strikers against weaker sides, saying:

“It is exciting to see them two together. That will be a good partnership. Those two are boys you like to have around the goal when clubs are not giving you space.”

Can the pair link up to dynamic effect in Manchester red?